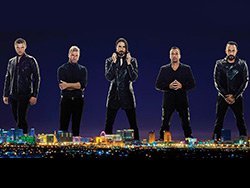 Want to step back in time and relive your youth? Check out the Backstreet Boys Vegas show to transport you to that time.

Want to save money before you hit the show? Below are some of our top articles on dining options and how to save money at the Las Vegas restaurants.

Backstreets back alright! In a time where boy bands were everything and the term fangirl was coined, Backstreet Boys were one of the hottest, and still one of the most memorable boy bands out there. We’re still struggling to decide which of the five is the hottest. Your votes would be greatly appreciated.

The boy band rose to fame in 1997 when they released their first self-titled album, and just two years later they released “Millennium.” Both albums received Diamond Awards for selling more than 10 million copies. Continuing to scorch the music scene, the group went on to sell more than 75 million albums worldwide.

Brush up on the lyrics, practice your dance moves and bring out that old Backstreet Boys tee we know you still have. It’s time to watch these boys take the Vegas stage one more time.

Backstreet Boys Vegas is held at 9:00 PM on select dates.