When Bob and I visited New Orleans back in Spring of 2005 we were able to enjoy a lot of what the city has to offer. Of course the food and music were the top of our list and this eggplant soup recipe traveled back home with us!

We dined at both NOLA and Emeril’s while there and one night they served this eggplant soup at one of the restaurants. With a cup of roasted garlic in it, it starts off on the right foot of greatness and we were hooked! {OMG I love roasted garlic – vampires beware!} We were happy when we found it on his website and have been making it ever since.

The weather was iffy for the time we went and was worried that our trip would be canceled due to a large hurricane that either diverted or was downgraded by the time we left {can’t remember which}.

Later that year while we were in St. Thomas we heard the devastating news that the amazing city of New Orleans and surrounding areas were hit hard by Hurricane Katrina. We were hanging out in the pool with others watching the TVs with sadness as the stories started progressing. One of the couples that were there had family in New Orleans and they lived in Houston. Their children kept calling and to give play-by-play reports too that we were not hearing on the news. Fortunately, their kids headed to the Houston home and they were safe.

Several of the restaurants and small businesses that we visited didn’t open back their doors. {One I can remember was Bella Luna that was A-M-A-Z-I-N-G.}

I was happy to see that Muriel’s New Orleans is open after Hurricane Katrina and is one that I would love to go back to visit. Not only is the food stellar, but the ambiance is fun too!

We haven’t been back since but I would love to go see how far along the city has come in rebuilding. 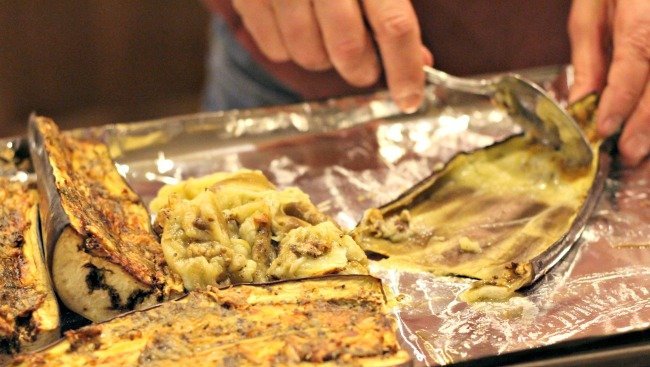 When Bob pulls the roasted eggplant from the oven I could eat it just like this! The smell of the roasted garlic paste and herbs that have melded make me want to grab a spoon and sneak a bite!


Sorry… no Buster photo because he either doesn’t like to watch Bob cook or was enjoying his pile of warm laundry out the dryer. Probably the latter as he is currently snuggled down in a load of towels that just got tossed on the couch! Las Vegas got hit hard with a cold spell and all my furry babies are cuddled in beds since it’s 37 degrees!
Previous Post: « Copycat Juggle Bubble Recipe for Family Fun
Next Post: Spiderman Cookie Recipe »