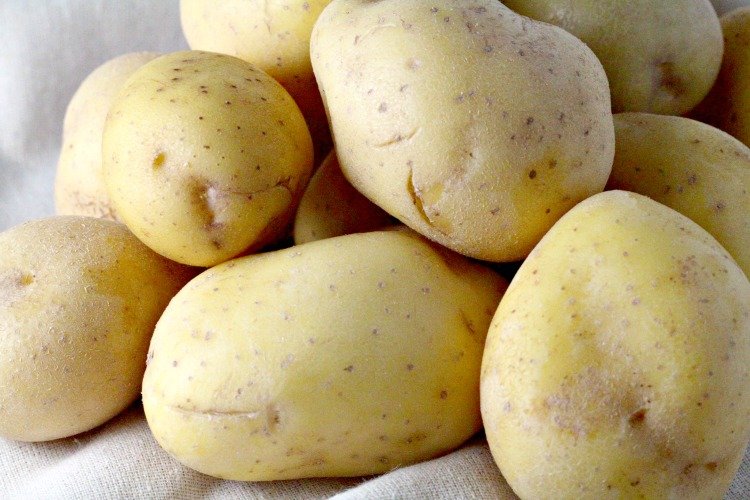 My grandfather’s favorite spuds to grow is the Yukon Gold potato. He says that there isn’t a better potato out there… and we agree!

Have you ever noticed when you go to a restaurant and their sides’ menu doesn’t doesn’t state “mashed potatoes” but rather “Yukon Gold mashed potatoes?”

One of our favorite dishes to use them for is homemade gnocchi. Click here to view all of our Yukon Gold potato recipes.

Flavor Profile: Originally marketed as having a buttery flavor, which comes from a combination of the yellow flesh and moist texture. Good potato flavor.

Usage: In foodservice, chefs have gravitated to the Yukon Gold image as a positive one for menu branding. Primarily used as mashed and in salad preparations. Roasting or boiling are also popular cooking procedures.

From Wikipedia about Yukon Gold Potatoes:

Yukon Gold is a large variety of potato most distinctly characterized by its thin, smooth eye free skin and yellow tinged flesh. This variety of potato was developed in 1960’s by G. R. Johnston and R.G. Rowberry in Guelph, Ontario, Canada at the University of Guelph. The official cross was made in 1966 and the Yukon Gold was finally released into the market in 1980.

Unlike some other potato varietals the Yukon Gold can stand up to both dry heat and wet heat cooking methods. Its waxy moist flesh and sweet flavor make it ideal for boiling, baking and frying but these potatoes will also withstand grilling, pan frying, and roasting.

This variety of potato was named by Gary Johnston and Charlie Bishop. Initially named “Yukon” by Johnston for the Yukon River and gold rush country in Northern Canada. Bishop suggested adding Gold to better reflect the colour and appearance of the potato.

What is your favorite “everyday” potato to cook with?